The first time DaxLueg on Heuberg mountain was ever mentioned dates back to the year 1350 where there was record of the “Dachslueg" or “Dachs Lueg“ (aka Badger Lueg). Allegedly, the name “Lueg” referred to the importance of caves, but the name could also be derived from the dialect verb “peep” (peer, to watch or observe) and perhaps that's where the word "Dachluger" (Roofwatcher) comes from. Less commonly, the name could be translated to mean “The Badger peeking out of hiding. " The farmstead of Dax Lueg has always been the highest point of the Hallwanger municipal area and a good location to view the surrounding area. 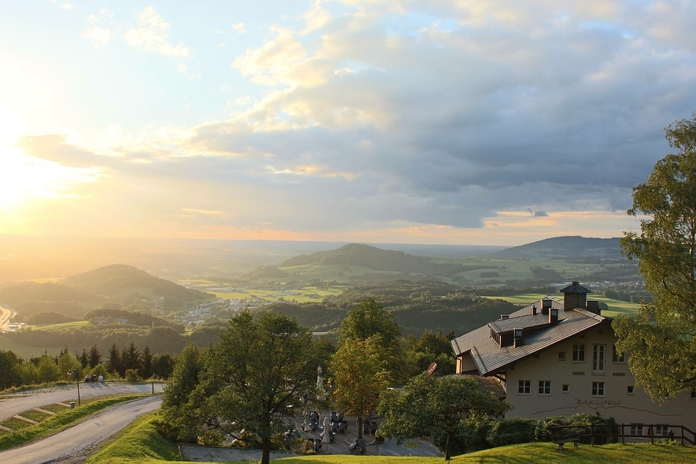 In 1624 the property of St. Peter’s was enlarged when the surrounding forest was purchased. The house was completely rebuilt in 1669, and the next major reconstruction was carried out in 1928. On the Rupertusalm, the farm Taxluegg (as it was called and spelled circa 1900) hikers were already being served simple meals. Then, only a few years later, Matthias Freundlinger established a proper restaurant. In 1926 the farm disappeared and a new restaurant including hotel was established under the tenants Anna and Ferdinand Steinhuber.

In 1959 the house burned completely to the ground leaving only ashes. It was then rebuilt to its present form that you see today. In 1969 the hotel was closed due to water disposal problems and re-opened in 1996.

Since Januaqry 2013 Andreas and Kurt Schuber have been the new tenants of the restaurant and hotel “DaxLueg” and it's our pleasure to welcome you!

We use cookies on our website. Some of them are essential for the operation of the site, while others help us to improve this site and the user experience (tracking cookies). You can decide for yourself whether you want to allow cookies or not. Please note that if you reject them, you may not be able to use all the functionalities of the site.